Are you 18 years old of age or over? You are visiting website with alcohol.
Sorry! You must be over 18 years of age to access the website.

Shaped by centuries, a hard and rough landscape with many scars on the body and rough people with many scars on the souls. This is an area called Rudohoří until recently. Whether this name originated from the mining of ores or from the red-headed jays, so often seen at sunset behind the highest peaks of the local mountains, one thing is certain – hard, but with great humility, the local brewers defended and guarded the honesty of our beer. Rudohor is here to continue this godly activity of theirs and once again guard the beauty of our dearest, honest craft beer for local people, local beer - Rudohor.

The Rudohor Brewery was created to oversee the return of the craft beer tradition to the region as a symbol of pride for the patriots of our mountains and foothills. We brew your beer only from local water, hops, malt grown within sight of our mountains, according to the traditional recipes of our ancestors.

The building has undergone construction development corresponding to its diverse use. The original owners were the famous Czech noble family Šlik who entered the world history of money with the word dollar, which has its etymological origin in the Jáchymov tolar minted on their estate in Jáchymov. The privileges of the Šlik family included, among other things, the right to brew, and therefore the location of the brewery in this beautiful building is a natural continuation of their legacy. 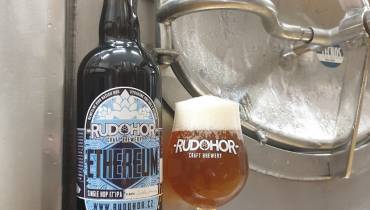 For February, we have prepared for you our strongest beer so far. This top-fermented ETHEREUM Single Hop 17°IPA will at first set you off with the full sweetness of passion fruit, but soon follows a pleasant wave of bitterness that encourages you to drink more. The MOUTERE hop that we have chosen for you in this Sigle Hop comes from New Zealand and its characteristic notes of citrus and the already mentioned passion fruit will impress you very intensely.

where to
FIND US